Throughout the history of the United States, there have been many examples of how innovation, passion and creativity have helped define America. One example of this, is the creation of a National Aeronautical and Space Administration (NASA) by the thirty-fourth President of the United States, Dwight D. Eisenhower, on July 29th, 1958. During the past fifty-eight years of its operation, NASA has continued to help encompass Americans’ desire to explore places once thought to be unimaginable and to utilize their need to create new technology. NASA has been a successful government program over its history, so why are many citizens and politicians wanting to stop funding NASA?

When I say the word “NASA”, chances are that most of you immediately think of missions to the moon or satellite launches. However, those are just a small fraction of what NASA works on. Many of you do not know how much the technology in your life has been developed and designed by NASA.

According to Business Insider, “…the Space Program’s research and advancements extend well beyond spaceflight into everyday life. Since the agency’s creation in 1958, technologies originally developed for space missions have been adapted for commercial products and services on Earth.” Specific examples of the many technologies that have originated from NASA include artificial limbs, cell phone cameras, MRI and CAT scans, memory foam, solar panels, firefighter gear, and much more. NASA also utilizes the research that it gathers to help the science and math community all over the world, causing it to have a considerable global impact. As found in an article on Unreasonable.is (an economic blog site), Ron Garan, a former NASA test pilot, said, “The ISS [International Space Station] provides a unique environment for scientific discovery that simply cannot be duplicated anywhere on Earth. Research on this orbiting laboratory is not only enabling humans to explore the solar system, it is leading to countless improvements for life on Earth.” NASA is not only about conducting missions in space and researching life on other planets, but they also use what they find in their studies to help develop tangible products that the public can use in their everyday lives.

The creation of a nationalized space and aeronautics program in the United States has had an effect that can’t be beat by any other government program, in my opinion. Just think, when NASA was launched in 1958, millions of young, American scientists were soon to be born. They may have not known it yet, but by watching Apollo-11 land on the moon on July 20th, 1969, they were on a path towards science and innovation. When NASA announced that it was going to send a man to the moon, many people were skeptical at first; After all, sending someone to the moon had never been thought of before. However, NASA set out and disproved what was thought by many to be impossible. NASA was able to achieve their goal in a short, and efficient manner, only taking eight years to complete their mission. On that day, millions of people all across the world watched and gazed in awe of what NASA was able to achieve. Neil Armstrong and Edwin “Buzz” Aldrin instantly became world-wide heros after their words of, “…The Eagle has landed” were transmitted from the moon to everyone’s television speakers. This is a moment that will live in everyone’s memory; a joyous event that created a generation of inspired scientists and engineers that dream of accomplishing their goals.

However, over the course of the past fifty years, NASA’s annual budget allocated to
them by the US Government has continually decreased. This sad trend began in 1967 when the budget for NASA accounted for a mere 4.41% of the national budget. The budget has decreased exponentially every year since then. According to WhiteHouse.gov, for the fiscal year of 2016, President Barack Obama and his administration only allocated 0.5% of the national budget for NASA’s use. An interesting fact is that on each dollar that is taxed by the US government, only half of a penny goes to NASA. To visualize this, if you take a dollar, and you try to cut it into the portion of the budget that goes to funding NASA, you wouldn’t even reach the ink on the paper. This is appalling and needs to be changed because of the need to fund the projects that NASA is currently working on. For example, NASA is currently working on projects such as the Advanced Spaceborne Thermal Emission and Reflection Radiometer, which is focused on capturing high-resolution images of the Earth in order to create detailed maps of land surface temperature, emissivity, reflectance and elevation on Earth. Another example of a current NASA project is the Autonomous Sciencecraft Experiment (ASE). This is a driverless satellite that decides what data is important to capture and send back to Earth, all on its own. These projects will help the future of the United States and even the world as a whole, stretching the boundaries of possibility through NASA’s innovative spirit and motivated mindset.

The idea of giving NASA more money to incorporate into their projects makes sense,
since many aspects of our daily lives can trace their roots, in some way, back to NASA. But, the topic of funding NASA has opposing viewpoints that argue that US tax dollars are better used on issues “down here on Earth”. One such opposing viewpoint is illustrated in an article on USNews.com, “To boldly go where no man or woman has gone before, America must first get its financial house in order. If the government continues to spend money on such luxuries as the “Lasso an Asteroid” program [referring to a NASA project proposal to capture an asteroid and send it into orbit with our moon to study its complexion. The plan was eventually turned down by the government], there will be less money available for core functions.” Yet, the opposition’s concerns can be easily squandered by the benefits of continuing to fund NASA. Increasing NASA’s budget would allow for major projects to be conducted, which would help make discoveries that would benefit the scientific community and the public as a result. In the words of world-renowned astrophysicist Neil deGrasse Tyson at a speech given in 2012 at The American Museum of Natural History, “Science is good at ‘piggybacking’ when it comes to research. When it comes to a mission to Jupiter, for example. Many different types of research, from all fields of science will be looking for something during that mission. Big missions have many different fields of science wanting to study something during the course of that mission”. This allows for various economic concerns to dismissed as legitimate concerns. As stated earlier, NASA’s budget has been decreasing ever since 1967, the year when the percentage of the national budget that it was allocated peaked at 4.41%. Paradoxically, the demand for science and technology from society has increased exponentially over the years. If the US Government were to allocate a higher percentage of its budget towards funding NASA, the whole country would benefit, whether it be directly from research or from the many innovations that NASA has been able to make over the years.

Believe it or not, NASA has also been able to make a significant contribution to society 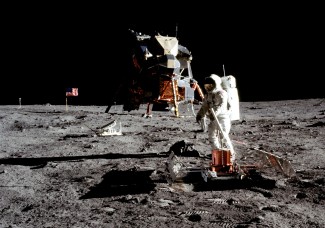 over the course of its history. According to spaceref.com, “…space flight has affected culture in multiple ways, ranging from worldviews altered or completely transformed by the images of Earth from space and the spectacular views of space from Earth-orbiting spacecraft, to a sense of our place in the universe made possible by studies of cosmic evolution and the search for extraterrestrial life, and the embodiment of these and other themes in literature and the arts.” This abstract idea of how NASA has an impact on society brings up a good point. We, as humans on Earth, are currently orbiting an average-sized star (the Sun), which is part of a larger galaxy (the Milky Way), which is just one of a hundred billion galaxies (most of which are much bigger than our own). It benefits the world to think about these facts and notice how small the Earth really is. By funding NASA, we would be funding the future of our civilization, since, at the current pace, we will run out of fossil fuels within the next seventy-five years; this would cause us to not be able to support our world economy or meet the world’s energy needs. Not funding NASA to find solutions to this inevitable problem could lead to the permanent extinction of the human race. It only makes sense to think about these imminent issues now, while we still have time to act. Shouldn’t NASA be the organization that is responsible for the discovery of a new, Earth-like planet that can sustain human life?

Throughout the years, NASA has been able to make major impacts socially, economically and globally. With that being said, the search for understanding of the unknown is not over yet. NASA is still needed for their discoveries and their innovative spirit. All of the world’s best scientist, mathematicians, and engineers dream of working for NASA. They dream of working for NASA because of the program’s storied past, success, and innovative spirit. If we defund NASA, and indirectly destroy our space program, the repercussions of this event will be unfathomable. NASA has been a very innovative organization that has been able to make major impacts that benefit the world. According to NationalGeographic.com, “Putting a man on the moon not only inspired the nation, but also the world”. The moon landing was one of the most iconic moments in American history and it caused people all around the world to take an interest in science, math, technology and space. The fact that people want to stop funding NASA would have been unimaginable to a young child who had just witnessed Neil Armstrong and Edwin “Buzz” Aldrin be the first two men to set foot on the moon. We need to increase NASA’s budget so that the American spirit of innovation and creativity is not lost forever. There are many examples circulating around blog posts and the internet, from people of all walks of life on why NASA shouldn’t continue to be publically funded. However, all of the opposing ideas originate from people that are only looking for an immediate benefit to their cause, whether it be a business incentive or a program that they are looking to fund. No cause or business incentive is more important than the continuation and funding of the United States’ space program. I ask you to make the correct choice in voting to continue to publicly fund NASA, since the fate of human civilization rests in your hands.